I don’t think most of us nowadays immediately think of doughnuts and Halloween. Though, many of us who grew up in the eighties and nineties have fond memories of the Dunkin Donut’s Munchkins at school birthday parties. It is not that doughnuts are not an important part of fall (I see you apple cider doughnut) but in the mid part of the 20th century, the doughnut and Halloween went hand in hand.

Now I will admit, I can’t pinpoint the exact time that Halloween and doughnuts became a thing. Maybe if I was doing the research on the history of doughnuts as a whole then I might have a better idea. (Don’t worry one day that will be a post). I do know that I can find articles from at least the 1930s pairing the holiday with these treats. Get ready for a lot of quotes from old articles!

A 1930s article joked “Halloween is the doughnut’s heyday” and that it had to be the most popular ringed object after wedding rings of course! The article also mentions that you could buy the doughnuts at the local bakery or make them yourself which is a sentiment that many of these articles through the decades shared.

In the 1940s, especially during the ration years of wartime, the doughnuts were touted as an easy party idea for the young and old. Many menus were given that often included simply serving the doughnuts with apple cider. A 1941 article claimed that “no Halloween party is complete without doughnuts”. Dorothy Dean agrees in her 1942 column where she says “For many years, All Hallow’s Eve has been the occasion for parties complete with ghost stories, jack-o-lanterns, cider, doughnuts, and apples”. A 1946 article makes the bold claim that “doughnuts are more a part of Halloween than pumpkins, witches, ghosts and corn shocks all lumped together”. First, I don’t know about all of that but it does highlight the popularity. Second, in case you did not grow up in rural America like I didn’t, a corn shock is a group of cornstalks cut and tied together with twine. 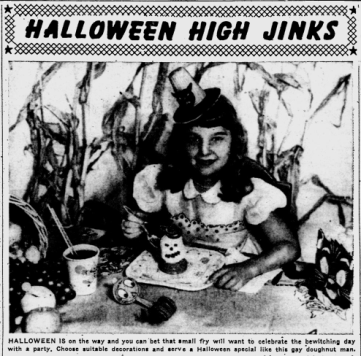 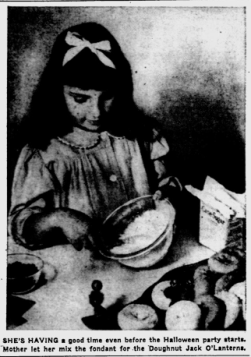 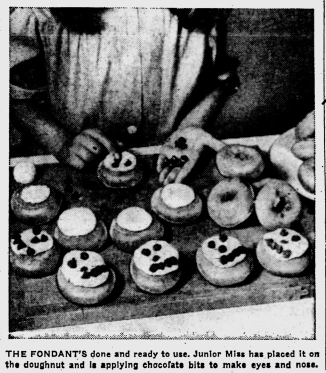 The 1950s still had the pairing going strong. You can start to find many more articles mentioning the fact that you could buy a “window box or two of doughnuts from your grocer’s ready-to-eat cake department” versus making them from scratch. In 1956 an article wrote that “For better, never worse, some foods have been linked with certain times of the year” and that “Halloween just would not be the same” without a doughnut. Another article of the same year agreed that the doughnut is one of the many great traditions of Halloween. One also starts to see the doughnut get some festive decorations such as icings or gumdrops arranged to look like a face which is a trend that continues into the sixties.

The sixties and seventies have very much a similar sentiment as the previous decades. In a 1967 newspaper, a columnist jokes that the holes in the doughnuts were for young witches to place on their broomsticks while I read a 1960 article about kids holding UNICEF Halloween Doughnut parties to raise money for the United Nations Children’s Fund. While in the seventies you still see many menus featuring the doughnuts as “young hobgoblins along with adults love doughnuts”. Another article claimed that a homemade doughnut is a “treat for all your Halloween guests”.

It’s not like we are completely deprived of Halloween donuts. Both Dunkin Donuts and Krispy Kreme put out specially decorated Halloween donuts. Also, most doughnut shops, as well as grocery stores, start carrying fall-centric doughnut flavors such as pumpkin spice or, like I mentioned at the start, apple cider. So why did doughnuts stop being such a big trend for Halloween? I have no real sources to point to but I think we can make some educated guesses. First taste changes. We are much more likely to buy or make cupcakes, cakes, cookies, or brownies as a sweet treat for a Halloween party. Most of our grocery stores have perfectly placed displays full of appropriately decorated treats to tempt us while we shop. Second, as a society, we have moved away from taking or receiving homemade items from people that we do not know as the coveted “Trick or Treat”. Whether through urban myths or real-life events we are much more cautious of these handouts. Bags of fun-size candy bars reign supreme now.

So next time you are planning a retro theme Halloween party give the doughnut a chance. Also, do you remember doughnuts fondly as a child or remember making doughnuts for Halloween? Does anybody wish that doughnuts and Halloween would become a big thing again? Let me know in the comments.

“Donut stunts can be used for Halloween Party Games”. The Telegraph Herald. October 27, 1950.

One thought on “Halloween and the Doughnut”