This is a cake that I see sooooooo often in community cookbooks and it has been on my “To Bake” list for what seems like forever. How could it not be? It is a cake made with mayonnaise. (Spoilers I know!) Either way it turns out you have a great story. Though seeing as it endured in cookbooks and recipes boxes for so long, it has to be good…right?

What ingredients are in Chocolate Mayonnaise Cake?

Simply a Chocolate Mayo Cake is just a cake that uses mayo in place of the eggs and butter or oil. Just like Tomato Soup Cake, there are two different versions floating around. The first and older recipe is a chocolate cake that includes raisins, dates, and nuts and is baked in one layer either in a square or oblong pan. The other is just a regular two-layer chocolate cake that is frosted with whatever frosting is desired.

Who and where was Chocolate Mayonnaise Cake created?

The mayonnaise cake has often been credited to Hellman’s Mayonnaise who developed a recipe for a chocolate cake to be used with their mayo. Mrs. Paul (a wife of a Hellman’s sales distributor) used Hellmann’s Mayo rather than the butter when baking a cake. Her experiment resulted in a moist and rich cake that was soon used by homemakers throughout the country. Though Mayonnaise cakes had existed before, such as in a 1927 article for a Mayonnaise Cake that included the instruction to whip up together an egg and ½ cup of oil to be added to the batter of the cake, it was definitely Hellman’s that made them famous.

So we need to take a quick journey into the history of another name that this cake can be found under which is the $100 Cake. The basic tale is that a woman was in New York City and decided to have lunch at the Waldorf Astoria and ate a delicious piece of chocolate cake. She inquired about the recipe and I have read two different ways this mystery woman obtains the recipe. First, the chef refuses and she comes back with $100 to buy the recipe which he happily obliges. Second, she writes to the hotel for the recipe and the chef sends her the recipe with a bill for $100. As I am sure you already guessed, the recipe is for the chocolate mayo cake. In 1949, this cake and story got passed around the National Food Editor’s Conference in Chicago. Many of these women most likely went back to their home newspapers and printed this unique recipe and possibly the story in their own food columns.

Except that according to an unknown food columnist for The Evening Independent on July 27, 1949, the story of the $100 Cake was just not true. In the article, they print another article by food columnist Cissy Gregg who was trying to clear up the story. In it, Cissy talks about how they printed the story and the recipe in 1945 which they received from a friend. They make mention of a New York Hotel but never write which one. Another newspaper food columnist picked up the story but did mention the Waldorf Astoria as the supposed extortion scene. The ritzy hotel was shocked and appalled that someone would think that they charged a woman that much for a recipe. They notified the newspaper that mentioned the hotel and a retraction and apology were written. Though unfortunately as of right now I could not find that particular article or newspaper where that retraction and apology were written. Much to Gregg’s dismay that four years later this story was still making the rounds. Gregg goes on to say that the original $100 cake was for a Deviled food cake and not even the chocolate mayo cake which was published in the same article. This can be verified in the March 9, 1945 article by Cissy Gregg called “She took the Cake, $100 in the Bargain”.

When was Chocolate Mayonnaise Cake popular?

First and foremost, I don’t think this cake was super popular during any one period of time. I think it got peaks of interest and so I would consider the Chocolate Mayo Cake more of a cult classic. Just like tamale pie, this cake did find a moment during times of food scarcity such as the Great Depression in the 1930s or the rationing period of the 1940s. Having an easy swap for eggs, butter and oil were probably a god sent for some homemakers at the time. Though that doesn’t explain why it still garners some interest even today. I think that all has to do with the fact that it is a cake made with an unlikely ingredient. James Beard in his cookbook James Beard’s American Cookery writes that this cake has had “great popularity from time to time, mainly because it sounds daring”. I would wholeheartedly agree with that statement.

One of these such moments was the late 1940s to the early 1950s most likely due to the 1949 National Food Editor’s Conference in Chicago as mentioned in the previous section. Josephine Gibson in her Pittsburgh Press column had several readers write in for a recipe for the Chocolate Mayonnaise Cake in 1949. Another Pittsburgh newspaper in 1950 said that the cake was “familiar to a great many of you” and that it “enjoyed a sudden popularity a year ago or so.” In 1954 in the St. Petersburg Times, the printing of the mayo cake recipe “created quite a great deal of comment”. Many who tried out this cake “hack” of using mayo found it to be quite delicious. A 1952 article called the cake not only easy to make but the end result is quite flavorful. In another article of the same year, the recipe was called a “standby for family desserts” that is “easy and economical”. Even in 1995 when a reader wrote in to a newspaper asking for a recipe for Chocolate Mayo Cake, the columnist was amazed by the sheer amount of answers she received from readers. 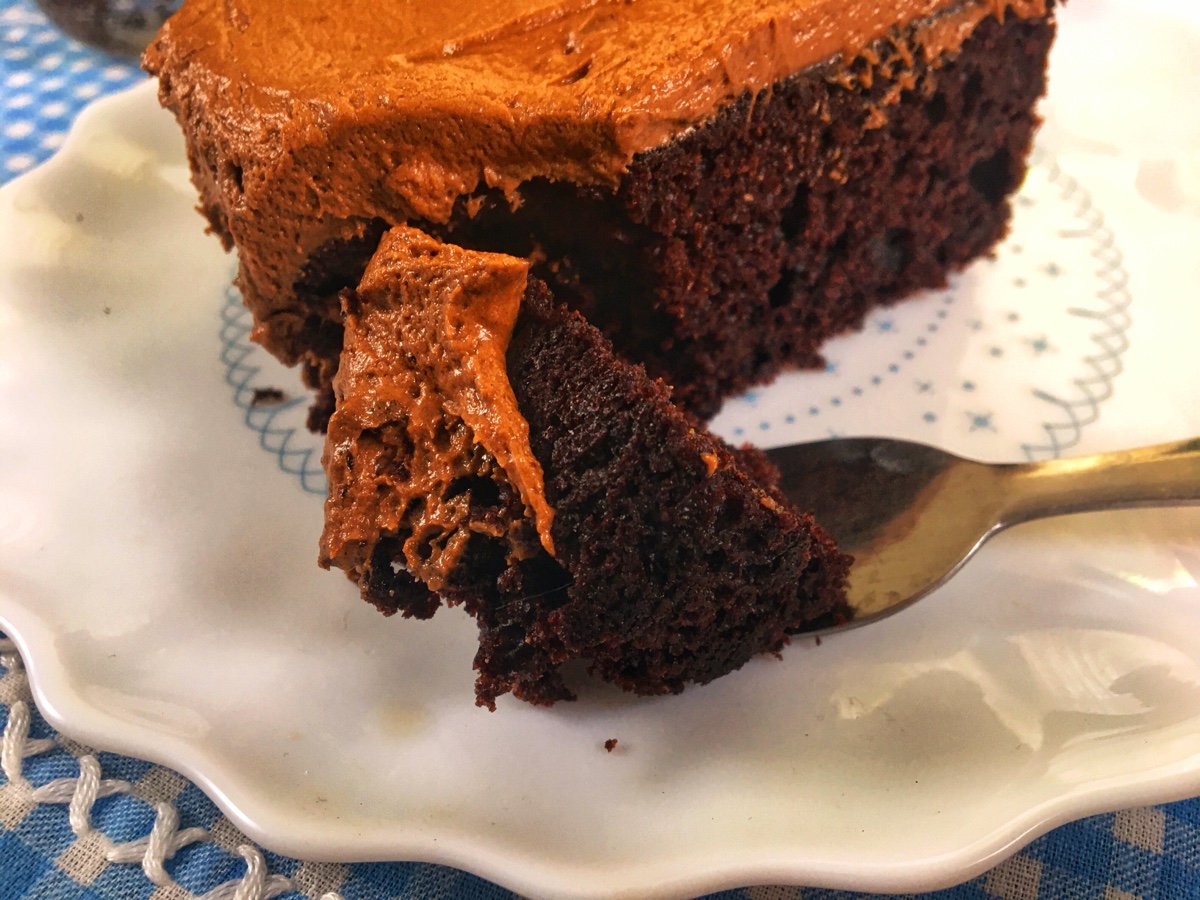 Why should I make Chocolate Mayonnaise Cake?

Just like with the Tomato Soup Cake, there will be no convincing some to try this cake. Trust me when I say that you can not taste the mayonnaise. Again I get it. Mayonnaise is just not a condiment that some people like. But if you are up to being adventurous, this really does make a darn tasty cake. Plus it is a great recipe to have on hand when a cake is desired but there are no eggs or oil in the house.

How do you make Chocolate Mayonnaise Cake?

The cult classic chocolate cake made with mayonnaise.

Byrn, Anne. American Cake: From Colonial Gingerbread to Classic Layer, the Stories and Recipes Behind More Than 125 of Our Best-Loved Cakes. United States: Rodale, 2016.