Growing up my family was not a big Jell-O family.  Sure my mother sometimes made the ever popular Jell-O jigglers (kids of the eighties know what I am talking about) and for an occasional treat there might have been Jell-O pudding cups in the fridge.  On rare occasions a 7-Up salad would appear at family functions made by one of my aunts but that was it.  Mainly I remember Jell-O as something my mother gave us when we were sick.  I didn’t even realize that there was a culinary world around this powdered gelatin till I was older.  Amazingly, I’ve also gone my whole life without partaking in a Jell-O shot.  I don’t know what that says about me…. 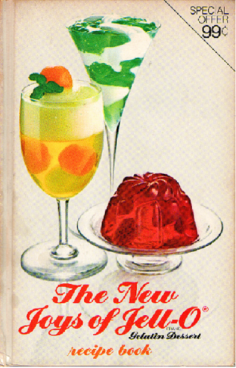 I recently found a 1970 copy of The New Joys of Jell-O Recipe Book at a local thrift store.  At first I was going to add it my Etsy shop but the more it sat on my desk the more I became obsessed.  Was Jell-O really that versatile?  Do all these recipes actually taste good? That is when I decided I was going to make all of the recipes in this cookbook.  The good and the strange to see for myself how great they actually are. 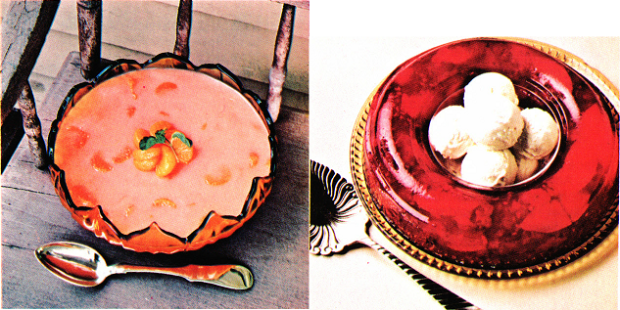 Some of the Jell-O desserts I will be making: Frosted Mandarin Dessert and Jellied Peach Melba, 1970

I am putting a few guidelines on this for me to follow.  First, I will try be to as authentic to the recipe as I can.  For the most part, following this rule should not be hard.  There maybe a glitch or two with a few products and flavors being discontinued.  Oh and no coconut.  I hate coconut….. Second, I need to style and garnish the end products like they would in a cookbook from the 70s.  Luckily this cookbook gives quite a bit of examples. Third, I’m going to try to disperse the savory congealed salads in with the desserts.  Originally I was going to just start from the beginning and work till the end.  Then I realized that I eventually be hitting two chapters of nothing but protein wrapped in gelatin salads.  I not sure my modern stomach could handled all that congealed goodness at once.  And lastly, I will try to do two recipes each month and I will be posting the results every other Monday.

Some of the Jell-O salads I will be making: Zest Ginger-Fruit Salad and Jellied Fresh Vegetable Salad.

With over 100 recipes in this little book, this will be interesting.  I will either come out of this with a new found love of Jell-O or I will NEVER want to touch the stuff ever again.  Or and the most likely outcome is that I will stay indifferent to Jell-O like I have all these years.

So what do you think of the challenge?  Does your family used or actually still do make some of these congealed salads?  Do you like or detest Jell-O?

One thought on “The New Joys of Jell-O”