In the mid-1970s, Bicentennial fever swept the nation which celebrated the 200th anniversary of the United States becoming an independent nation. There were special quarters, half dollars, and dollar coins minted between 1975 and 1976. Cities around the country had celebrations and fireworks. Museums such as the Smithsonian had special exhibits. Even Queen Elizabeth and Prince Phillip came to America to celebrate with President Ford and First Lady Betty Ford. Basically what I am saying is this was a big deal to the country. 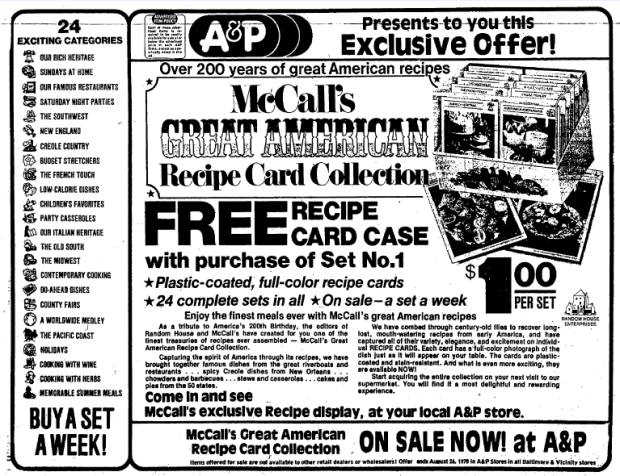 As a result, McCall’s magazine created the Great American Recipe Card Collection to capitalize on the popular trend. It was created by the editors of McCall’s and Random House supposedly “capturing the spirit of America through its recipes” by bringing “together the famous dishes…from the 50 states”. It consisted of a plastic recipe card case featuring a bald eagle behind a red, white, and blue shield surrounded by a plentiful food bounty. There are twenty-four sections (a through x) that each had twenty-four recipe cards which became 600 cards in total. On each section divider card, there is the title of the section, a little illustration on the theme in the top right corner, and a full-color photo on the front while on the back was a little blurb about the section’s theme. Lastly, there was an index booklet that had a quick reference for all the recipes in the collection. These were available starting in 1973 all the way through the early 1980s. 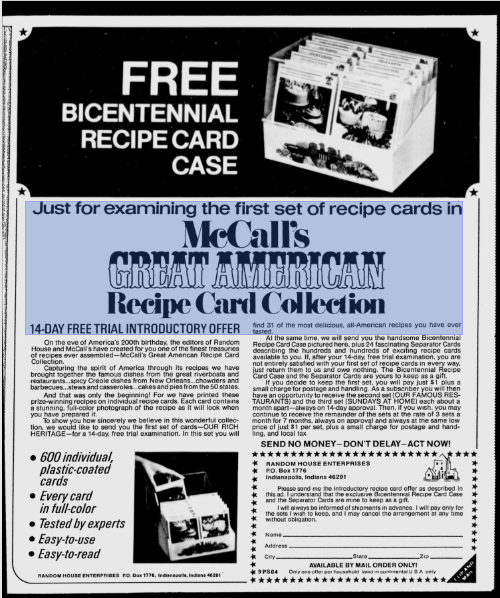 There were two ways to obtain this collection. The first was to send the card found in the newspaper and McCall’s magazine to Random House. In return, you would get the Bicentennial recipe card case, the 24 divider cards, and the first set of twenty-four cards called “Our Rich Heritage” for a free 14-day trial examination. If you liked the card and wanted to keep going, then you would pay one dollar for the initial set and then get sent the rest of the cards one by one and eventually in small groups at a charge of one dollar per set. 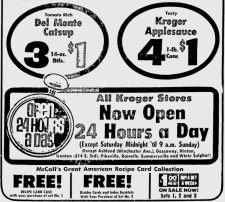 The second way was through your local grocery store. There would be a display of these cards and once a week another set would be added. The recipe card case came free with the purchase of the first set and the dividers came free with the second set. Again each card sets were one dollar and by the end, one would have paid $24 for the whole set. Seeing as in the 1970s, The New McCall’s Cook Book cost only $7.95 for way over 600 recipes, this was not the best deal in the world. Despite this, these deals were quite popular with many other companies doing similar recipe boxes.

Quick collector note: These are very rarely 100% perfect. Nearly all of these recipe card box collections are usually missing a card or two. It is just the nature of the box. It is easy for the owner to pull one out and forget to refile it. While I do check the boxes I put in my Etsy shop while noting any missing in the description, not every shop owner does a check. If a perfect box is what you seek then just shoot the owner a quick message to ask if they checked or not. Or if you are buying it from a thrift store or antique mall, just remember that there should be twenty-four sections and each section should have twenty-four recipe cards. Also, each section is numbered and lettered. So “Our Rich Heritage” is section a and each card belonging to that section is number 1a, 2a, 3a till you get to 24a.

sources for the ads: