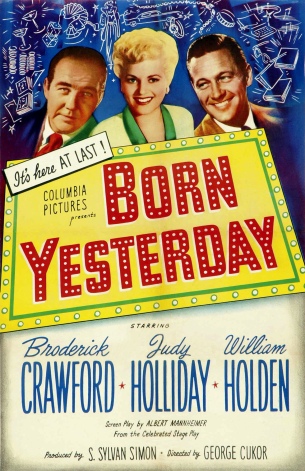 This month’s Cinema and Canapes I will be talking about the 1950 film Born Yesterday which stars Judy Holliday, William Holden and Broderick Crawford. It was directed by George Cukor and was released by Columbia Pictures. It is a film verison of a play of the same name that also starred Judy Holliday.  Holliday won an Oscar for her role in the movie. To go with it I made a Gin Swizzle for a cocktail and a blue cheese and pecan dip called Lively Dip which I will be posting about tomorrow.

My sloppy attempt at recapping the story with some definite spoilers:
The movie starts with junkyard tycoon/gangster and really all around bully, Harry Brock (Broderick Crawford) and his ex showgirl mistress, Billie Dawn (Judy Holliday) checking into the presidential suite of a fancy Washington D.C. hotel. Harry is in the capital to work with his shady lawyer, Jim Devery (Howard St. John), to buy votes to further his agenda of saving him money in taxes. Devery convinces Harry to sit down to an interview with journalist Paul Varrell (William Holden). Varrell during the interview gets to witness Harry’s hot tempered side when he first yells at Billie for trying to have a drink and then assaults his lawyer for making an joke at his expense.

Billie as she is getting yelled at by Harry over wanting a drink. 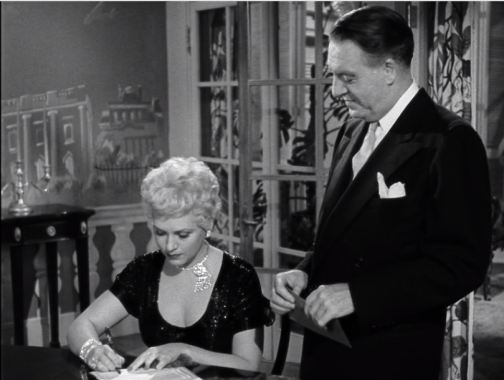 Later in the evening, Congressman Norval Hedges (Larry Oliver) and his wife comes to the suite to meet Harry and Devery in which Billie, who is out of her element and comfort zone, ends up embarrassing Harry despite Harry’s own missteps during the evening. Harry ends up hiring Paul Varrell to work with Billie to ready her for Washington D.C. society while ignoring his own ignorance and roughness. 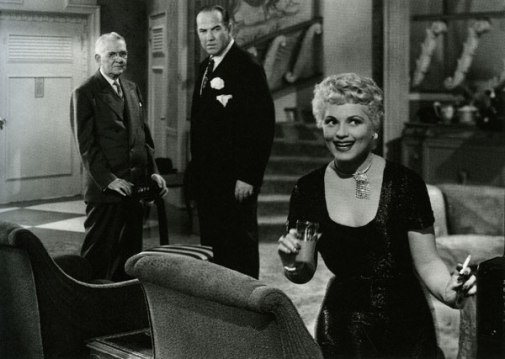 Billie “embarrassing” Harry in front of the Congressman.

There is an instant attraction between the two but Paul knows it is best not to engage. He doesn’t waste any time starting to teach Billie and she is like a sponge sucking up the knowledge. She quickly transforms from the woman who tells Varrell that “I’m stupid and I like it” to one that is loaning books out to housekeeping and has a rather large dictionary to look up words she does not understand while gladly taking in the sights around the capital. 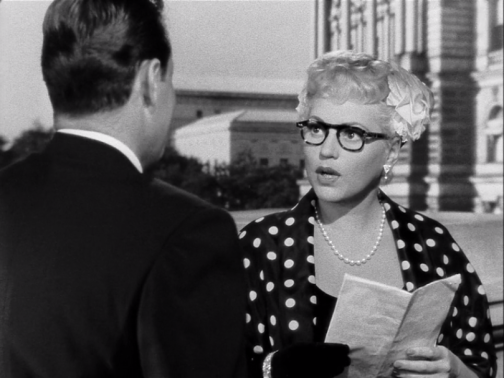 Billie and Paul discussing an article that he wrote. She called it called it “the best thing I ever read” but to Paul’s surprise she didn’t understand a word of it!

As Billie starts to grow and see a life outside of pretty dresses, fur coats and other expensive items, she starts to slowly question Harry’s business.  This comes to a major head as throughout the movie Devery, the lawyer, has been having Billie sign all sorts of papers putting much of Harry’s business dealings in Billie’s name to protect him from a legal standpoint. Ignorant Billie would sign without question but educated Billie wants to know what she is signing.  This sets Harry off who comes storming in and strong arms Billie into signing but after she tells Harry that she is leaving. Devery who has been telling Harry to marry Billie for legal reason, reminds him what is at stake with her leaving, but Harry is delusion thinking that she will be back. 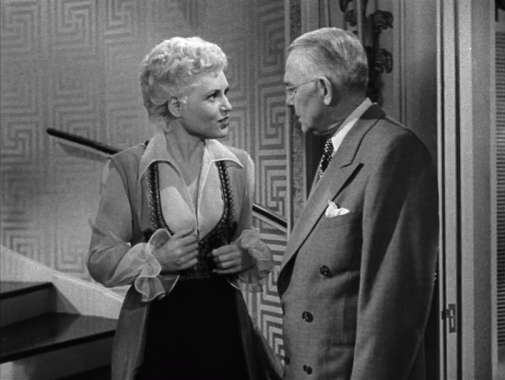 Billie trying to figure out why the Congressman lets Harry talk to him the way he does.

Harry right before he hits Billie and forces her to sign the contracts.

Billie wanders around D.C. for a while and eventually calls Paul. They make a plan to get the contracts that she has been signing by sneaking into the suite when they think Harry is not there. Unfortunately Harry was in the room so Billie goes to distract him while Paul grabs the contract.  Eventually Harry realizes that the contract is gone and Billie and Paul tell them what they did. Harry of course gets mad but Billie tells him that she knows that she owns 126 of his yards.  She says that she will sign them back at a rate of one per year as long as he behaves.  As she calculates it, for everything bad that she knows he has done that Harry could probably be put away for 900 years. Leaving Harry thoroughly confused, Billie and Paul exit the hotel room and end up getting married! 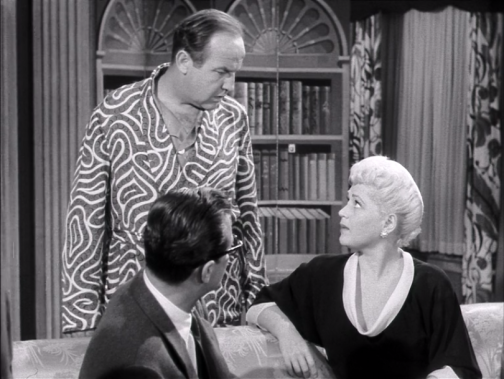 Awww they got married!

Things I particularly liked about the movie:

Judy Holliday’s wardrobe: In the original play version she only had 5 costume changes but in the movie that was bumped up to 13. Costumer designer Jean Louis did a great job creating an amazing wardrobe that help further illustrate Billie’s journey. My favorite you ask? It is probably the outfit with the polka dot jacket! 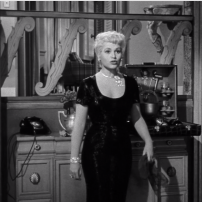 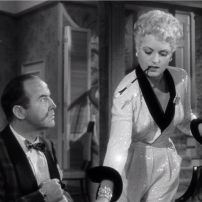 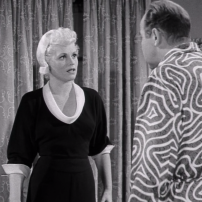 Favorite Character:
I think the casting in this movie was great and every actor really did help make the characters. That being said Billie Dawn is hands down my favorite in this movie. From the first moment when she yelled “WWHHHAATTTT!” to Harry, I was hooked. I know that Rita Hayworth was the first choice to play the Billie Dawn in the movie and I’m sure she would have been great in a different way but I love the Billie that Judy Holliday brought!

Favorite Scene/Musical Number:
The gin rummy scene which is hard to explain because it is such a visual scene. The joke is that Harry taught Billie to play the game and now she wins every time. Billie takes it serious and I LOVE watching her shuffle her cards around while she ponders her next move. 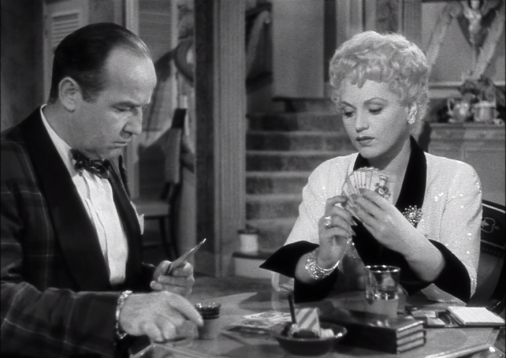 Would I Watching It Again:
Of course I would as this is already not my first viewing.  If I was to make a personal list of my favorite 100 classic movies, Born Yesterday would probably be in my top 25!

One thought on “Cinema and Canapes: Born Yesterday (1950)”