My next recipe in my journey to start making recipes from my recipe box collection was a small bit of a challenge of mostly my making. The original challenge I set for myself was that I would just pick a card, make the recipe and document my thoughts on the end result and the process of making the recipe without fussing about perfection. Easy right? It was just suppose to be a simple first reaction but I can’t just keep it simple. I set myself up for a bit of failure.

First I made a late 1940s or possibly early 1950s recipe called potato bake that was handwritten on a piece of notebook paper advertising a Florida business.  The end result was actually quite good after taking a bit of time trying to figure out a few of the directions. The problem is I kept thinking about what I could do to make it better or did I even get the proportions correct in the first place. So I allowed myself to experiment with the potato bake and picked a new recipe.

The next one looked easy and quick so I thought it would be perfect.  Famous last words….. It was from a one Miss Esther and the recipe was for cherry cheese tarts. The recipe only needed a few ingredients so I gathered them up and got to baking. First problem was that I made the rookie mistake of not reading the direction…..like at all……before I started the recipe. Whew was Miss Esther NOT an organized woman with her thoughts. I had to read the words on the card several times before I got the idea of what needed to be done.

The next problem is that the recipe said that it should make thirty of these cheese tarts. Now I’m sure I am not alone when I say that I very rarely ended up with the same amount of baked goods as a recipe tells me I am going to have.  So I prepared two twelve cup muffin tins and started filling them up expecting only to make 24 not 30. Which is when I noticed that the batter was not going to be enough if I filled them to where I thought they should be filled. Yes Esther left that instruction out as well! So I second guessed myself and thought maybe these little cheesecakes were not meant to be filled up so instead I evenly distributed the batter between the 24 muffin cups. Though Esther never mentions cupcake liners, I made sure I used them as I knew getting the mini cheesecake out of the pan would be difficult otherwise.

So I baked them, cooled them and topped them with the cherry pie filling. Surprise surprise, the proportions were off.  With the smaller layer of cheese cake all you could taste was the cherry pie filling. I was devastated. I kept telling myself that this was the challenge I set up and it was not a big deal they didn’t work out. Just take the pictures and write about the process but I couldn’t do it. So I put the tarts in the refrigerator and washed my hands of them. The next day when I opened the fridge I saw them sitting there. I wasn’t going to waste the ingredients so I pulled one out and bit in to it. I was amazed that chilling over night made the cheese layer stand out more because again lovely Esther never mentioned it. That was enough to renew my interest.

It got me thinking that most likely Esther got this recipe from the newspaper. I did a quick search and I was right! This recipe was popular with the late 1970s and early 1980s. The recipe was included in a working women’s menu in a 1973 newspaper. This recipe calls for only one package of cream cheese and makes only twelve tarts. Mrs. Dorthea Brusiloff won second prize (and $3) in 1978 for these little cheesecakes that she called “Cherry Blossom Cheese Tarts” and hers only makes 18 tarts. It was printed in a “Look Whats Cookin'” section of a 1986 newspaper that showcased recipes by readers. Emile Clifford was featured and her recipe which she calls “Cheesecake Tarts” included the addition of lemon juice to the batter. She was able to get 24 tarts out of the mixture by filling them 2/3 of the way full but she also tops them with Cool Whip. 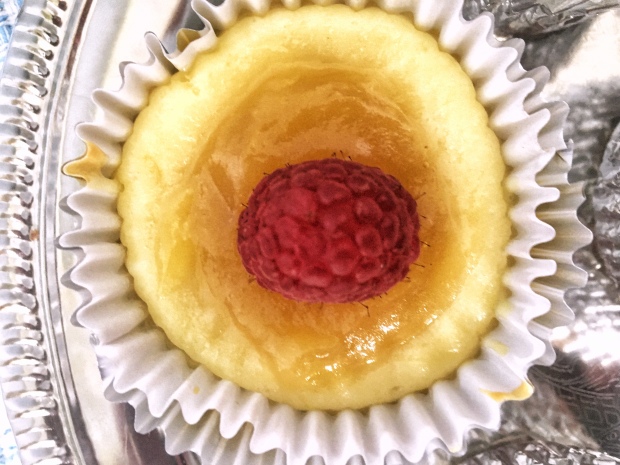 So with renew vigor I made the recipe again and filled them to where I felt they should be filled. Then topped them, let them sit over night and now I feel that this is what the intended product was suppose to be. Though the original recipe calls for topping them with cherry pie filling, you can can top them any way you like. This time around I made some with the cherry pie filling, some with lemon curd and raspberries and some with caramel sauce and chopped pecans. The world is your oyster as these little tarts are the perfect base for your imagination. Despite all the drama I had making these they are very simple to put together.

So thank you for reading my rambles about my discontent with the cherry cheese tarts process. I wrote this all out for a couple of reasons. First to illustrate that the trials that can happen when following these old handwritten recipes. They were originally written for the user not the masses so a little reading between the lines may need to happen. There maybe things that they take for granted that they may leave out. Two some times things just don’t work out in cooking or baking even with the best recipe or no matter your experience level. You may need to walk away and comeback later with a fresh perspective.

An easy mini cheesecake recipe that made the rounds in the newspapers in the late 1970s and early 1980s. The recipe came to me in a vintage recipe box and was given to the original owner by a lady named Esther.