Who and where was Clam Dip created?
So it is going to be kind of wonky the way I answer this question. The way the dip as we know it got into the American food lexicon was when the dip was presented on the Kraft Music Hall television show in 195Os. There where versions of the dip before the 1950s but it would have more likely been spread on bread or crackers. One of these such recipes appeared in Irma Rombauer’s cookbook Streamlined Cooking. Actually Jean Anderson of The American Century Cookbook traced the first print of the dip through some amazing sleuthing to President Woodrow Wilson’s second wife Edith Bolling Galt Wilson. Wilson wrote it down on a piece of paper but did not note where she got it. Again this would have most likely been used as a canape as dips did not became a thing really until the 1950s. 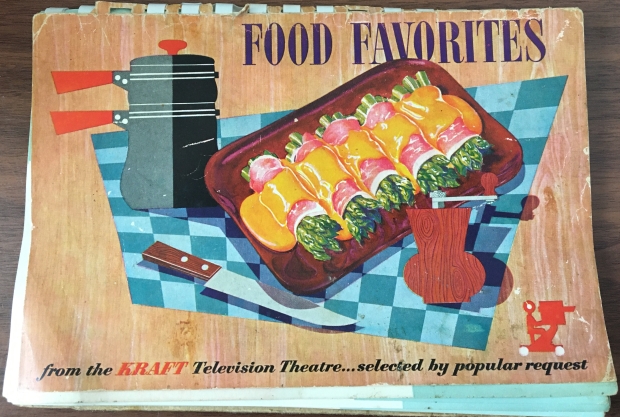 What ingredients are in Clam Dip?
Clam dip is a simple dip made with canned minced clams in a base of cream cheese with seasonings. A mid century variation was using chive cream cheese instead of plain or mixing in cottage cheese. In the 1960s, some verision included cheese or used condensed soup. Jane and Micheal Stern jokes in their cookbook, Square Meals, that the substitution of fresh clams for canned is “out of the question”. 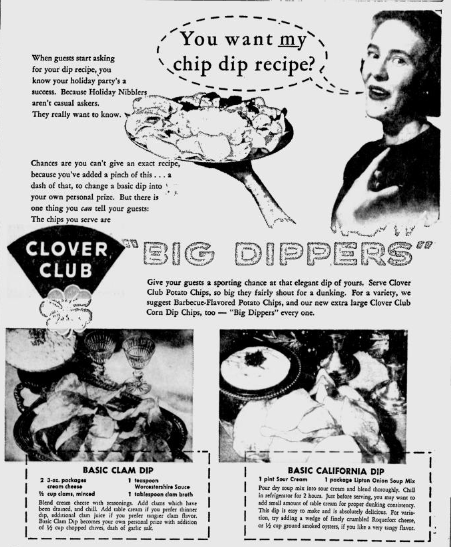 When was Clam Dip popular?
The 1950s was the complete height of popularity of this dip. After it was presented on the Kraft Music Hall show, canned minced clam sold out in New York City in 24 hours. That decade loved themselves some clam dip. It was considered “an easy to make and delicious appetizers for parties”. A 1955 newspaper ran a food contest for “snick and snacks” to serve at New Year’s Eve parties with clam dip winning second prize. In an article for college students in 1953, the author reminded the young hostesses not to “forget that wonderful clam dip that mother adores”.

By the 1960s, you could find premade versions in grocery stores. Helen Gurley Smith, who used to be the editor of Cosmopolitan magazine, in her 1969 Single Girl’s Cookbook proclaimed that clam dip was her favorite to serve at parties and that she even makes it just for herself.

Why should I make Clam Dip?
It is a wonderfully easy dip to make. If you are nervous that it will be too clammy in taste, it actually comes out quite subtle. I also think it would be particularly good with the tomato starter I made for the 1963 Thanksgiving dinner. Though if you hate shell fish of any sort, there will be no convincing you. There are many people fond of this classic dip. Sylvia Lovegren in her cookbook Fashionable Foods says that “clam dip is an American classic, worthy of an appearance at your next cocktail party”. Jane and Michael Stern says that the dip is ” easy to prepare and always in the best of taste, clam dip adds an elegant fair to snack time (especially elegant if the potato chips are rippled”.

How to make Clam Dip?

Notes: You can add other ingredients to this basic recipe such as a few dash of hot sauce, 1/4 cup chopped chives or green onions, or use chive cream cheese instead of plain.

3 thoughts on “History of Clam Dip”