Grasshopper Pie was the first history post I did for Quaint Cooking. It is unique as it is a completely different format than my other posts. Actually, the next history post, which was Chicken a la King, has the format that I still use to this day. I decided to redo the Grasshopper post as I have many more research resources in my possession but also to match the rest of the history post. I am still amazed at how many people read these history posts. I never in a million years would have thought that this series would be the most popular post on my blog. So a very heartfelt thank you to anyone who reads them.

What ingredients are in Grasshopper Pie?
The pie is based on the cocktail the Grasshopper. The cocktail is made by shaking together ½ ounce cream, ½ ounce white crème de cacao, and 1-ounce crème de menthe with ice. It is then strained into a glass.

Those flavors are then used for the basis of a fluffy no-bake pie. Marshmallows are melted with some half and half and then the crème de menthe and crème de cacao is mixed into the mixture. Whipped cream is then stirred into this and the whole thing is poured into a chocolate crumb crust. The pie is then chilled for a few hours and garnished as desired.

Marshmallows are the most popular way for the Grasshopper pie to set but unflavored gelatin and in the case of some old recipes, egg whites are also used. 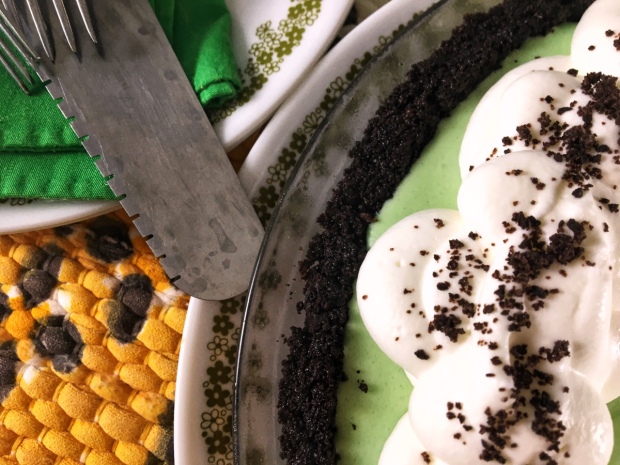 Who and where was Grasshopper Pie created?
There is no real definitive answer to this. Jean Anderson in The American Century Cookbook says that the first mention of the recipe that she could find in a cookbook was in the 1963 Gourmet’s Menu Cookbook. Though Anderson thinks (but can’t verify) that the recipe hails from a recipe booklet called High Spirited Desserts which was published by Knox Unflavored Gelatine and Heublein Cordials. No date on the leaflet but due to illustrations and such, she guessed it was from the late 1950s or early 1960s.

Oh and in case you were wondering, the Grasshopper cocktail is largely credited to the New Orleans bar in the French Quarter called Tujague’s. It is said that the owner Philip Guichet created the drink in 1918 or 1919 for a New York cocktail competition. You can check out the original recipe here.

When was Grasshopper Pie popular?
The 1960s was definitely the height of popularity for this pie. In the St. Petersburg Times in 1968 were amazed at the sheer amount of recipes for the Grasshopper Pie that were sent in when a reader inquired about a recipe. In probably what is my single most favorite article I have ever found, a reader who called herself Spiteful Sally wrote to a newspaper inquiring about the recipe in 1967. She was hopping mad that when she asked a friend for the recipe, she was denied. She wanted to get the recipe and bring it to this woman’s house and that she might even throw it at her. The letter got quite a lot of recipes sent in with one reader joking that she thought everyone had the recipe for Grasshopper Pie by now.

There was a novelty to the name. I can’t tell you how many articles reassured the reader that there were not any real grasshoppers in the pie. A reader won a weekly newspaper recipe contest in 1964. In the article she talks about when people first hear that they are being served a Grasshopper pie, the initial reaction is to “wrinkle-up their faces with the strangest looks”. A 1961 article tried to calm fears when it wrote “Grasshopper Pie is a treat to eat, and not what you think” and a 1962 article had the same sentiment when it wrote, “Don’t be alarmed, its name is taken from the after dinner drink called a Grasshopper.”

The main reason that the pie was popular was that it was super easy to make and could be made ahead of time. A 1962 article summed it up perfectly when they said that the Grasshopper Pie is tasty and easy to make and “What more can we ask of one recipe.” The author also commented that this is one of the column’s most popular recipes. A 1960 article in the Hartford Courant agreed when they wrote that the pie was “easy to make, is quickly prepared and needs no baking.” Another article from 1960 said that the best part of the smooth pie is that it is “easy to make, quickly prepared and needs no baking.”

The pie still has a following popping up, especially during St. Patrick’s Day and Easter due to the pastel green color of the filling. Nowadays the “Grasshopper ” flavor is really more associated with the mint and chocolate combination versus the crème de menthe and crème de cacao.

Why should I make Grasshopper Pie?
I may be biased as I quite like the combination of mint and chocolate but this is one of my favorite pies. It is not one I make often but when I do make it I remember why I like it. It is fluffy, creamy, and super delicious.

How do you make Grasshopper Pie?

If you want a more boozy pie, you can increase both the crème de menthe and crème de cacao by another tablespoon (¼ cup each).

A pie popular in the 1960s that is minty, fluffy, boozy and delicious!

One thought on “The History of Grasshopper Pie”