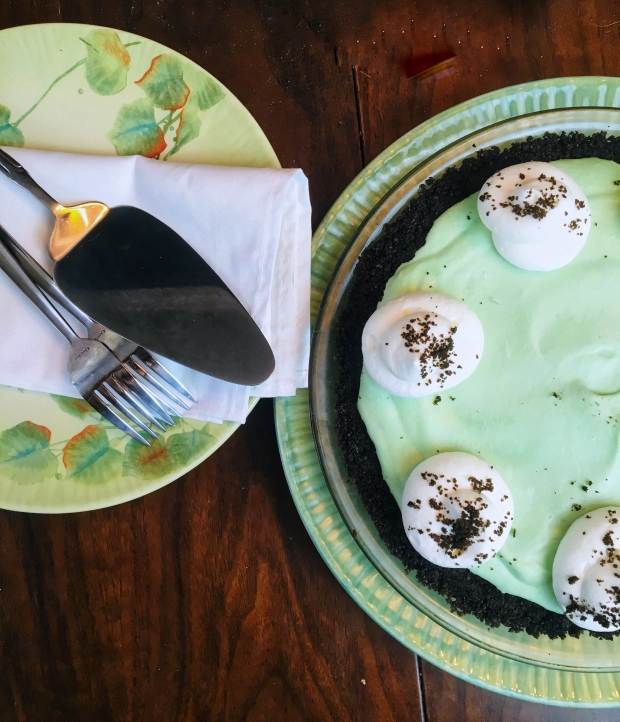 To know the history of the Grasshopper Pie, we first need to discuss the drink that inspired the dessert because, unlike the chicken and the egg, we do know which came first. For those who are not familiar with this alcohol concoction, the Grasshopper is made by shaking some cream, crème de menthe and crème de cacao with ice in a shaker and straining it into a martini glass.  The product is a sweet, minty and green after dinner drink.  It often had the word “girly” attached to it as shown in  episode 7 in season one of Mad Men,  where Pete Campbell’s coworkers teased him over returning a wedding gift at lunch by saying “when you finish shopping come join us. I bet they make a great grasshopper, Mildred” as they felt the task was for women to do.

When researching the origins of the drink, I got two conflicting stories.  The first was vague suggestions that it was most likely created sometime in the 1950s. While the other story is that a bar in New Orleans French Quarter called Tujague’s created the drink in 1918.  I do not know which is completely true but I do know that the recipe for the Grasshopper does not appear in my 1946 edition of Old Mr. Boston De Luxe Official Bartender’s Guide but does appear in a 1978 edition.  This little yet comprehensive 1940s tome does include drinks that utilized both crème de menthe and crème de cacao so its surprising that it would be left out.

Regardless of history, sometime in the late 50s and early 60s this drink rose to the height of its popularity and soon inspired the pie of the same name.  Again, the origins are hard to pinpoint.  What can be agreed upon is that the recipe was most likely created by a brand to sell products. Which brand you ask?  Well, I’m sure you guessed it………even this is vague. Ceil Dyer of the cookbook Backs of Boxes, Bottles, Cans and Jars suggest that this “Queen of Pies” was a recipe by the alcohol brand Hiram Walker that appeared in its advertising.  Jane Walker of the American Century Cookbook thinks (but can’t verify) that the first appearance might have been in an undated recipe booklet called High Spirited Desserts.  It was a collaboration between Knox Gelatin and Heublein Cordials but guesses, due to the illustrations and the way it was written, that is was most likely from the 50s or 60s.

The Grasshopper pie is quite easy to make and just requires some patience while waiting between steps. It uses crème de menthe and crème de cacao for the flavors just as in the cocktail.  While there are a few recipes I came across that used gelatin or egg whites to give the pie some structure, the overwhelming majority in old community cookbooks used good old marshmallows.  I chose to go that route because who I am to argue with tried and true recipes.  Then all you need to do is make (or buy if you rather) an Oreo cookie  crust and some whipped cream and you have everything to make a Grasshopper pie!

A couple of quick notes before the recipe.  This pie is made with alcohol that will not be cooked out so keep that in mind when serving.  Also, ideally you should purchase the green creme de menthe and the white creme de cacao but don’t stress out if you grab the wrong ones.  I accidentally bought the brown creme de cacao and still came out with a nice green color.  You can always add some green food dye if you want a more vibrant color. You can also keep the pie plain or garnish it with shaved chocolate or more crushed cookies crumbs.

Delicious minty pie popular in the 1960s that is minty, fluffy and delicious!