This was the salad that accompanied the 1963 Thanksgiving menu that you can read about here, here, and here. I did not grow up eating this salad. This was another dish that in my young mind sound so fancy and complicated. Surely a salad linked to such a high-class hotel had to have such elevated ingredients. When I found out what went into the salad, I was amazed at the very basic ingredients used quite like my surprise over chicken Divan.

Who and where was Waldorf Salad created?

The recipe was created by the maitre d’hotel Oscar Tschirky at the Waldorf-Astoria Hotel in New York City in 1893. It was served at a supper for 1,500 society folks from Boston, Baltimore, Philadelphia, and of course New York which celebrated the opening of the famed hotel which at the time was just called the Waldorf Hotel.

What ingredients are in Waldorf Salad?
The original recipe only called for apples, and celery to be mixed with mayonnaise. Others say the original recipe also included grapes but that is contradicted by Oscar’s own cookbook that was published in 1896. Grapes were however the first addition that started to be added to the recipe. Sometime by the 1920s, walnuts had been added to the salad. No one knows when people started adding marshmallows into the mix but was most likely sometime after the 1930s. Today the recipe is usually chopped apple, celery, grapes, and walnuts with a mayonnaise dressing.
There is a small controversy over the mayo because we humans like to argue about things like this. One camp says that mayonnaise is very clearly written in the original recipe and then that is what needs to be used. The other camp says oh no it can’t be mayo as Oscar was from Switzerland and therefore the dressing was most likely made with a base of oil and vinegar. Again Oscar’s own cookbook does say that the salad should be “dressed with a good mayonnaise”.

The original recipe as found in The Cookbook by “Oscar” of the Waldorf written by Oscar Tschirky.

When was Waldorf Salad popular?
It was popular when it was created through to the mid-century. Cole Porter added to this popularity in 1934 when he included the lyrics “You’re the top. You’re a Waldorf salad” in his song “You’re the Top”. Also in the 1930s, Jell-O featured a gelatin salad take on the Waldorf salad called the New Manhattan Salad which featured apple, celery and walnut pieces encased in lemon Jell-O flavored with a little vinegar.
Cecily Brownstone wrote at least three articles about the Waldorf salad in her long newspaper career. In 1954, she surmises that the popularity of the salad is not only because of its adaptability to one’s tastes but also the versatility it has with complementing many meals, especially meat and poultry. In 1957, she list a whole bunch of suggestions to update this classic some of which were quite interesting. Some of her ideas included adding pears, diced potatoes, and different cheeses as well as cooked ham, turkey, or chicken. Lastly, in a 1981 article, she suggested making a cake using the ingredients of the salad. 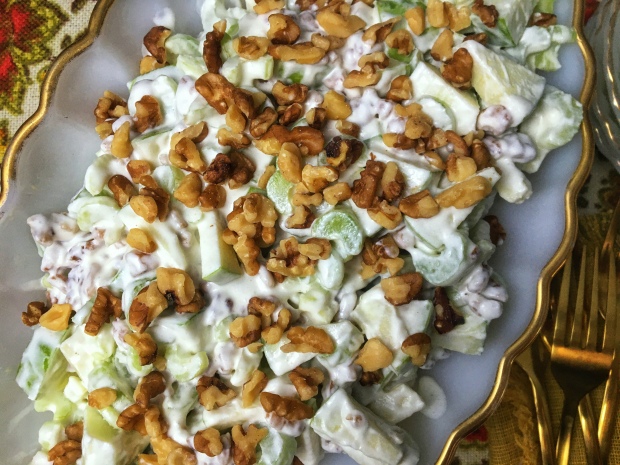 Even into the 1970s, articles were still being published about this salad with one joking that Oscar would fall “into the fish soup had he known what was going to happen to his crisp concoction”. In the article, the author concedes that many of these variations are quite tasty before offering their own variations such as Tropical Waldorf Salad with coconut, ginger, and dates instead of the apples or Beef Waldorf Salad with beef cubes, jarred spiced apple rings and marshmallows added to the classic salad base. In the late 1970s, recipes started substituting yogurt for the mayo.
Shiela Hibben, who was half of the Silver Palate team as well as a food editor for The New Yorker, called the salad a mixed blessing. She blamed the Waldorf Salad as leading housewives down the slippery slope of “the sorry mixture of sweet salads”. In Andrew F. Smith’s book Savoring Gotham, the salad is called an “American icon” and a “quintessential New York salad spread”. Today, the Waldorf-Astoria Hotel still sells about 10,000 Waldorf salads a year. 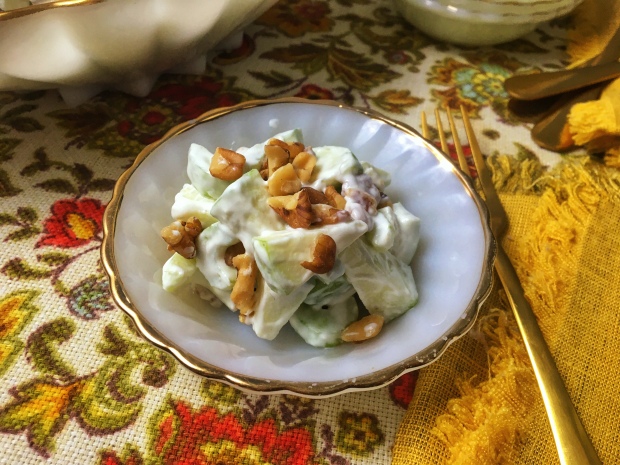 Why should I make Waldorf Salad?
There is something satisfying about the tangy dressing that goes with the sweetness of the apples and crispiness of the celery. Then the savory buttery flavor of the walnuts cuts through all of that. Plus it is a super simple salad made with super simple and easy to find ingredients.

How to make Waldorf Salad?

Tschirky, Oscar. The Cookbook by “Oscar” of the Waldorf. Saafield Publishing Company: Chicago, 1896.

“Waldorf: Variations on Salad From a Famed Hotel.” The Milwaukee Journal. October 29, 1975.

12 thoughts on “The History of Waldorf Salad”