I did not grow up with this cake. As a kid the name thoroughly confused me, I never understood why someone would eat something called Harvey Wallbanger. Actually both my parents who became tweens in the early 1970s did not grow up with this cake either. They both hail from working class blue-collar families so I am assuming that the kind of pricey Galliano liqueur it calls for was just never in the budget. Though I have a deep love for citrus flavors so I was quite excited to test this one out. 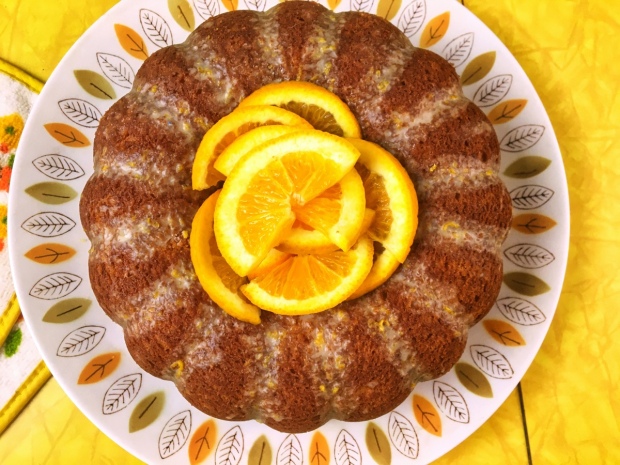 Who and where was Harvey Wallbanger Cake created?
We need to first talk about the origins of the Harvey Wallbanger cocktail. The story goes that a California surfer named Harvey lost a surfing contest. To console himself after, he decided to partake in some screwdriver cocktails (orange juice mixed with vodka) where he requested a shot of Galliano be added. He had a bit too many and ended up stumbling into the wall. Hence the name Harvey Wallbanger. A few bars in southern California claim ownership of the drink but most stories point to Donato “Duke” Antone and his Hollywood Blackwatch bar.

It is a funny little tale but many question the origin story of the cocktail. In a very detailed 2012 article titled Searching for Harvey Wallbanger for Saveur, author Robert Simonson went down the rabbit hole trying to verify the story. He could find no evidence of the bar and found proof that Donato Antone was not even living in California at the time. This all also coincided with a man named George Bednar becoming the marketing director of McKesson Imports who handled the importing of Galliano in the late 1960s. A new 1969 campaign was created with a surfer mascot named Harvey Wallbanger with the ads saying “Harvey Wallbanger is the name and I can be made!”. This mascot went on to be on all kinds of merch such as posters, t-shirts, and mugs. The most likely theory and one that Sam Dangremond for his 2015 article in Town and Country magazine concurs by saying that the drink may have been “the result of corporate collaboration between Antone and George Bednar”.

So now on to the who and where was the cake created. I feel like this is going to be a huge letdown as I wrote two whole paragraphs about the cocktail but I don’t know the answer to the question. The earliest mention of the cake that I could find was in a November of 1972 promotional article for the Sunbeam electric frypan which includes a recipe for the cake. Though I think we can make some educational guesses. This recipe was probably created for marketing purposes to further promote the cocktail and/or Sunbeam fry pan. I don’t think that would be a far leap. I also wonder if many people saw the cake in the Sunbeam ad and wanted to make the cake but not buy the electric frypan. These crafty home cooks converted it for a bundt pan and then it spread like wildfire from potlucks to dinner parties and so on. 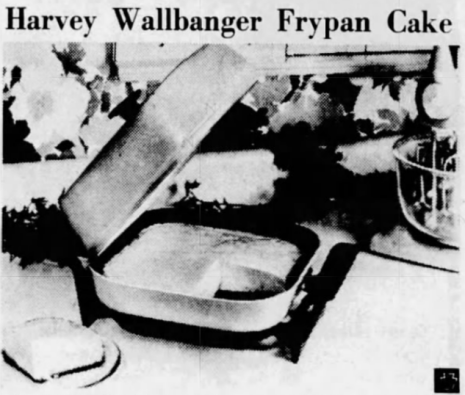 What ingredients are in Harvey Wallbanger Cake?
Again we are going to talk about the cocktail first which is simply made by mixing 1 1/2 ounces of vodka with 4 ounces of orange juice and then a 1/2 ounce of Galliano is floated on top by slowly pouring it over the back of a bar spoon. In case you were wondering Galliano is an imported Italian herbal liqueur with the main notes being anise and vanilla.

The cake mixes a box of yellow cake mix with the ingredients of the cocktail and a box of vanilla pudding. Then it is baked in a Bundt cake pan and then drizzled with a glaze. Some recipes in the 1970s use an orange cake mix which is not always available at every grocery store nowadays.

When was Harvey Wallbanger Cake popular?
The simple answer is the 1970s. The cocktail itself was huge during this time period. Think the Cosmopolitan during the Sex and the City days or the old-school cocktail Negroni which has gained huge popularity in the last few years. Bars and restaurants were having Harvey Wallbanger nights. Some offered the lure of a free t-shirt that featured the cartoon Harvey from the ads. Others sold Wallbangers by the pitcher. In short, the 1970s went crazy for this cocktail. 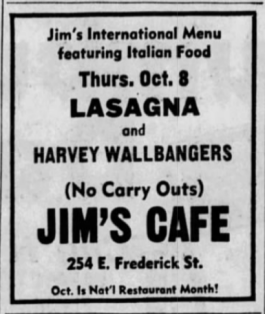 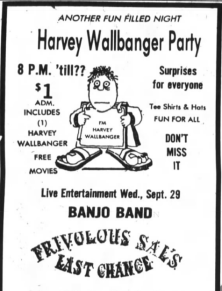 The same went for the cake version. A 1972 article illustrated this point by saying “Harvey Wallbanger, the drink from the Galliano people that had attracted so much interest across the nation has been incorporated in an easy to bake cake”. Many had the sentiment that the Galliano and vodka added to the cake turns a Harvey Wallbanger cake “into something special and a real conversation piece as well”. For a 1973 newspaper food column, this became a heavily requested cake with several readers writing in to ask for a reprint of the recipe. Another column from the same year wrote that they were getting a “rash of requests for Harvey Wallbanger cakes” with one reader calling it very good. After another such column printed the recipe, the newspaper got so many comments saying how great the recipe was. The cake even won a reader $5.00 when it was submitted into a 1978 newspaper recipe contest. The reader said that it was a favorite to serve on New Year’s Eve. A 1973 article agrees that the Harvey Wallbanger Cake was a “special occasion cake, rich, moist”.

This cake and the cocktail today are still heavily remembered as a 1970s classic. In the 2010 book Booze Cakes: Confections Spiked with Spirits, Wine and Beer called the Harvey Wallbanger cocktail “all the rage in the 1970s” and a “groovy twist on the classic screwdriver” while calling the cake a “light, moist, absolutely booze-drenched crowd-pleaser”. The cookbook Cake!: 103 Decadent Recipes for Poke Cakes, Dump Cakes, Everyday Cakes, and Special Occasion Cakes Everyone Will Love (2018) literally calls this recipe the “1970s Harvey Wallbanger Cake”. A 2004 newspaper article asked if the reader “Remember the ’70’s? Leisure suits, disco dancing and the famous cocktail, the Harvey Wallbanger.” 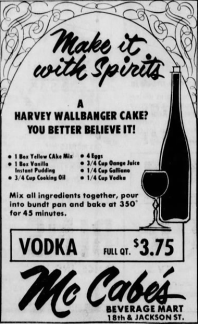 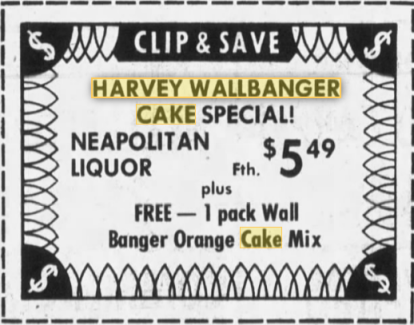 Why should I make Harvey Wallbanger Cake?
This is a seriously moist cake. I have tested this recipe is many variations and there has not been a dry one in the bunch. If you are worried about the alcohol, it is not overpowering instead it lends a delicious but subtle and hard to place dimension to the cake. Also it is BEYOND easy to make. Honestly you just need to toss everything in a bowl, mix together and bake. It comes out perfect every time.  I can totally understand why this was a special occasion cake in the 1970s. 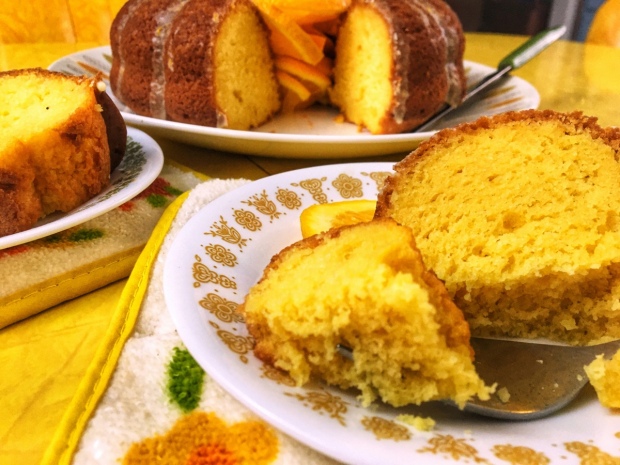 How do you make Harvey Wallbanger Cake?
I kept this recipe pretty true to the ones I found in the 1970s newspapers. I tested this out every which way and this is the version I personally liked the best. I did not try it with the orange cake mix because that flavor it not easy to find at every grocery store. I like to keep things easy and accessible here at Quaint Cooking.

Two more quick points and then on to the recipe. Galliano is a little pricey. I paid 26 dollars for a 750 ml bottle. Granted that lasted me the whole testing processing but just be aware that it does make this cake a little pricey to gather all the ingredients the first time. Second while you are out buying the vodka and you see an orange flavor one, give it a try in this cake. It really does drive home the orange flavor which is fairly subtle when using the regular vodka. Either way the cake is delicious which ever way you choose.

A classic boozy cake based on the popular cocktail of the 1970s.

Sources:
“About the House: Round or Flank Steak Makes Good Beef Jerky”. The Atlanta Constitution. April 26, 1973.

Buckert, Emily. “Have Your Galliano-Eat it, Too”. The Victoria Advocate. September 9, 1973.