I weirdly remember exactly how I learned about Green Goddess dressing. It was during an episode of Rachel Ray’s 30 Minute Meals though for the life of me I can’t remember what else was made in the episode. I do remember her talking about it being popular in the 1970s and it was not unusual for Rachel Ray to do kitschy and retro recipes. I will admit that it was quite some time till I made it myself and boy is it worth making homemade. 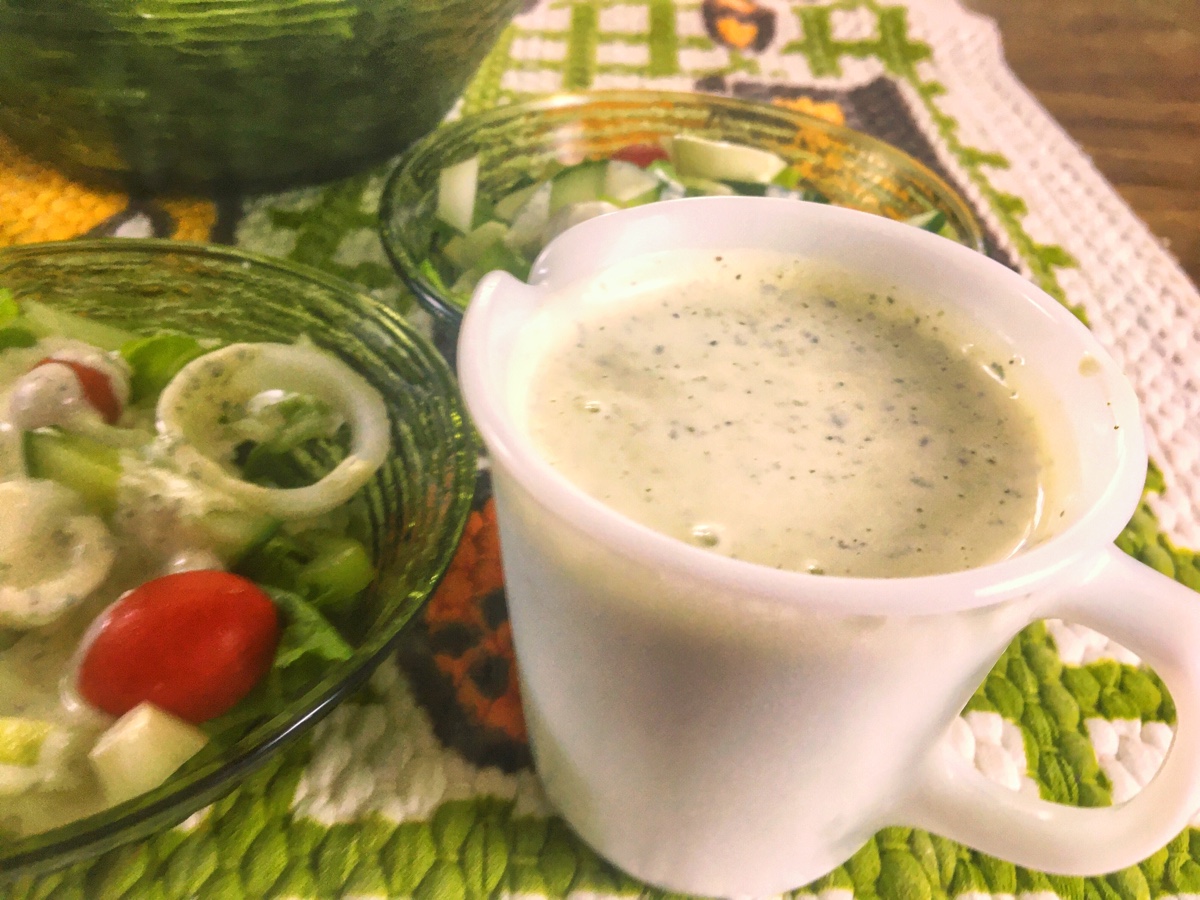 Who and where was Green Goddess Dressing created?
This dressing was not named for its pretty green color instead it was named after a play by the same name. During the mid-1920s, actor George Arliss was starring in a play called The Green Goddess. While the play was in San Francisco, Arliss stayed at The Palace Hotel where the chef created this dressing in his honor. Richard Harned tells a slightly different story in his book The Palace Hotel. It was still George Arliss in town for his play and staying at The Palace Hotel but supposedly Arliss did not like any of the salad dressing choices and challenged chef Philip Roemer to make a better dressing. The chef then created this herb-filled concoction. This is confirmed for the most part in a 1936 newspaper article. A reporter was able to visit the kitchen of the famed Palace Hotel where she was given a tour by chef Philip Roemer. He told her that “I created the salad eight or nine years ago. I got the idea for it from the play of that name”. 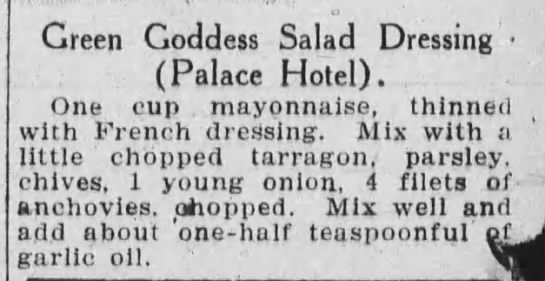 What ingredients are in Green Goddess Dressing?
The dressing is mayo-based with herbs stirred into the dressing. The herbs usually are parsley, tarragon, chives, and/or green onions. There is also vinegar in the recipe preferably of the tarragon variety. The original recipe also included anchovies but many modern versions use Worcestershire sauce instead. There has also been a huge crop of recipes in recent years that have tweaked the ingredients to make it more vegan-friendly finding alternatives to the mayo and anchovies or Worcestershire sauce.

When was Green Goddess Dressing popular?
So I will admit, I did only find one mention of the salad dressing in a 1920s newspaper and it was a printing of the recipe from the Palace Hotel. The rest of the articles that had any mention of Green Goddess was about the play it was created for. This does not mean it was not popular but more likely a local favorite that eventually spread out to the rest of the country. By the 1930s you do start to see the dressing on other restaurant menus as well as printed in newspapers.

Nalley’s Green Goddess Dressing ad that could be found in 1958 newspapers.

In the 1940s through to the 1960s, the dressing had a “well-deserved reputation” according to Duncan Hines. Cookbook author Helen Evans Brown in her very popular The West Coast Cookbook included the Palace Hotel recipe for Green Goddess dressing as well as another version. She felt that the salad dressing had a lot of imitations and versions but that many attempts were unsuccessful. In 1967 Wishbone introduced a bottled version of Green Goddess dressing which if felt “adds spirited taste to any salad”.

The 1970s is definitely a period where this salad dressing regained popularity. The 2018 cookbook The Fred’s At Barney’s New York Cookbook talks about the height of popularity for this dressing being the 1970s as it was everywhere. Many articles popped up to explain how to make a homemade version of the recipe despite by now there being commercially bottled versions available in grocery stores. Actually, in her 1977 food column, Mary Moore was so surprised by the flood of inquires in which she wrote “suddenly many of you are writing to me asking for the recipe for Green Goddess Dressing for salads like you buy in the stores”. Mary Moore went on to call the flavor “lovely”. A 1971 article called the dressing “rich and delicious” while another from the same years proclaimed that Green Goddess dressing will “make a true gourmet delight out of crispy greens”.

Green Goddess dressing has been gaining in popularity within the last decade. Marrion Cunningham in the cookbook Lost Recipes: Meals to Share with Friends and Family talks about the dressing gaining in much-deserved popularity. Jessica Battilana in her book Repertoire: All the Recipes You Need (2018) says “I am not sure that I want to live in a world where ranch is more beloved than Green Goddess, which is superior in both name and taste”. She goes on to says that she is doing everything in her “power to bring this vibrant, herb-packed green dressing into the limelight”.

A recipe for green goddess dressing has also been included in many popular cookbooks of the past decade. Martha Stewart called the recipe a “beloved California creation” when it was included in her 2015 Martha Stewarts Appetizers. The Barefoot Contessa herself, Ina Garten, swapped out the tarragon for basil in her version in the 2012 Barefoot Contessa at Home. New York Times Food writer Melissa Clark calls the dressing in her 2018 cookbook, Melissa Clark’s Kitchen, a “classic that I don’t mess with much” and that it “tastes good on almost any kind of vegetable matter (and fish, too)”.

Why should I make Green Goddess Dressing?
It is creamy, herby with such a nice green color and honestly, the taste payoff is so much better when it is homemade versus buying it bottled. Food writer and columnist Russ Parson agrees. In a 2007 article he wrote, “If all you’ve ever had is the bottled version of this, you might be surprised”. Rachel Smith Borrman agrees in her book Iconic San Francisco Dishes, Drinks & Desserts by saying “There’s something irresistible and mid-century about the tang combined with intense creaminess, brightened with densely incorporated herbs.”

Green Goddess dressing really does work on more than just salad. Try it with seafood, fish, or any protein really. It works as a dip for a veggie platter as a nice change from the classic ranch dressing. I quite like tossing with some shredded cabbage and carrots for a refreshingly different coleslaw.
A 2020 newspaper article called the 100-year-old dressing a “special sauce” that has stood the test of time despite being old school.

How do you make Green Goddess Dressing?

A Green Goddess recipe adapted from a 1950s recipe served to President Eisenhower during his time in the White House.

Chumley, Virginia. “Some Recipes Concocted by a Famous Chef”. The Chattanooga News. January 10, 1936.

Gilbar, Steven. Chicken a la King and The Buffalo Wing: Food Names and the People and Places That Inspired Them. Ohio: Writer’s Digest Books, 2008.

Kressy, Jean. “Homemade Dressing Might be Easier Than You Think”. Corvallis Gazette-Times. January 24, 2007.

2 thoughts on “The History Of Green Goddess Dressing”