So did I grow up with Thousand Island dressing? Well yes and no. My brother quite liked it and would get it for his salads the special occasions my mother would take us kids to a restaurant. I will admit I was way more of a Ranch kid. It also was not a salad dressing that came into the house very much. I more experienced it later on when I tried my first Reuben. It has not been a dressing I thought much about until I started doing this blog.

Who and where was Thousand Island Dressing created?
There are a few variations to the story of how this dressing came to be and how it got the name Thousand Island. In Craig Claiborne’s The New York Times Food Encyclopedia (1985), a woman recounted a tale to Claiborne about the origin of the dressing. She said that sometime in the mid-1920s a Belgian couple was dining at her grandmother’s Lake Michigan resort hotel. After complimenting her grandmother on the food, the man mentions that he was the head chef at the Drake Hotel in Chicago and talked about Thousand Island dressing. He told the grandmother that he had invented the dressing after a trip through the Thousand Islands in New York state and when his wife saw all the lumps in the dressing she proclaimed that it looked like a thousand islands. Jean Anderson in her book The American Century Cookbook (1997) recounts the same story but does mention that the Chicago Drake Hotel will not confirm nor deny the tale.

The next one is the one I am probably more inclined to believe as it is the one that actually hails from the Thousand Island region of New York. In the early 20th century in Clayton, New York, a man called George LaLonde was a fishing tour guide for the Herald Hotel. After his tours, he would serve his guest a shoreside dinner. At these dinners, his wife, Sophie LaLonde, would serve a dressing made of mayo, ketchup, and pickle relish of her own making which quickly became a hit. Vaudeville actress and singer May Irwin was in attendance at one of these dinners. Some say it was May that named the dish while others say it was Sophie. Though it is supposedly May that introduced it George C. Boldt, the owner of the famous New York City hotel, the Waldorf-Astoria (where the Waldorf salad hails from), who loved it and added it to the menu thus introducing it to the masses.

Real quick side note on May Irwin if you tend to be nosy like me and have to google the wiki page of everything and then do a quick YouTube search of the songs. The songs and style of music that she was known for are very racist.

What ingredients are in Thousand Island Dressing?
I have to agree with Craig Claiborne when he wrote that it is hard to find a definitive classic recipe for Thousand Island dressing. There are SOOOOOOOOOOOO many versions to find dating from the 1910s to now. Some versions are simply mayo and chili sauce mixed together to the more complicated. Though by the mid-century most of the dressings usually consisted of mayo mixed with chili sauce and/or ketchup with a bit of chopped onion or chives, eggs, and olives. Some did substitute the chili sauce for bottle French dressing. The popular way and fancy way to serve it for many years were to drizzle the dressing over an iceberg lettuce wedge. 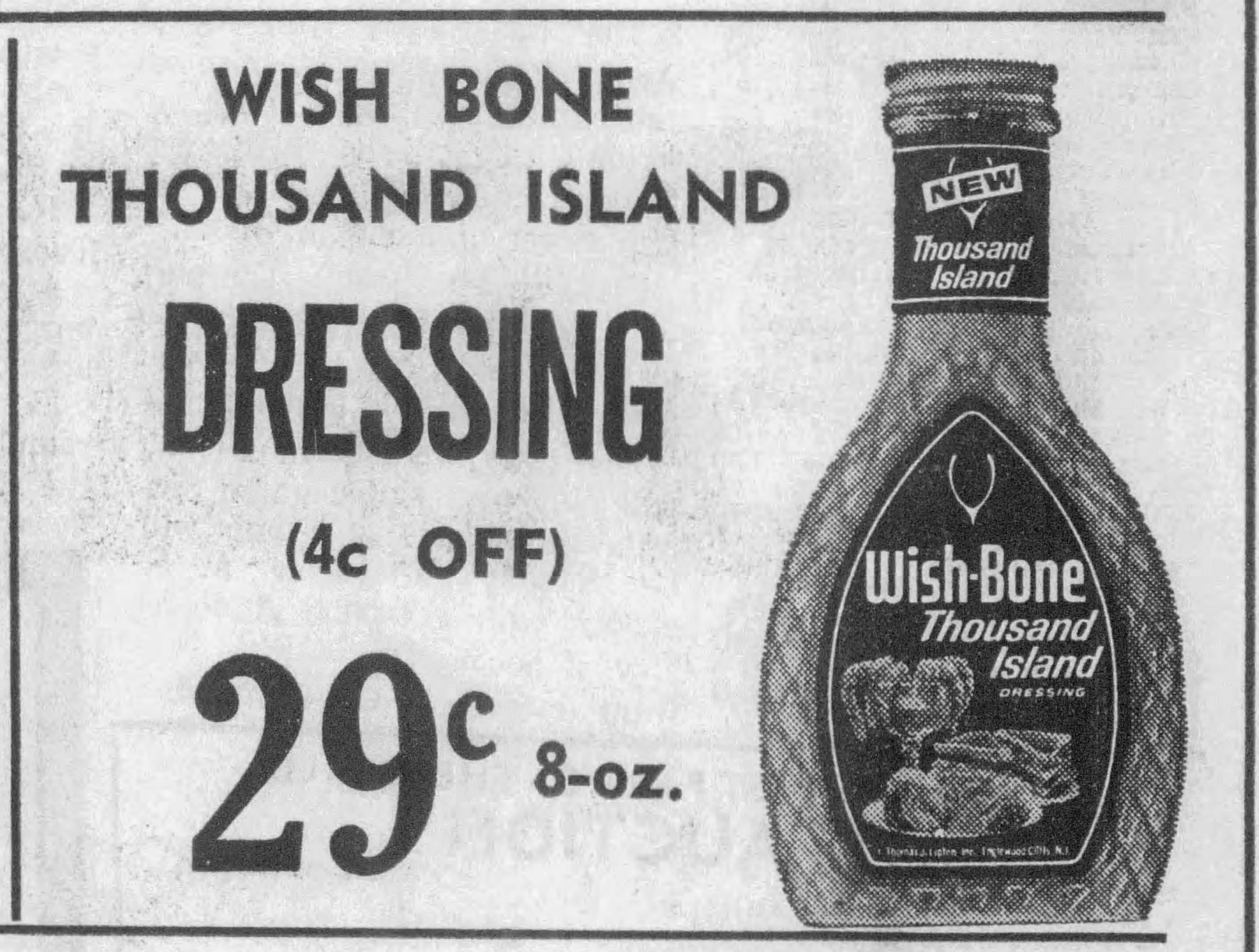 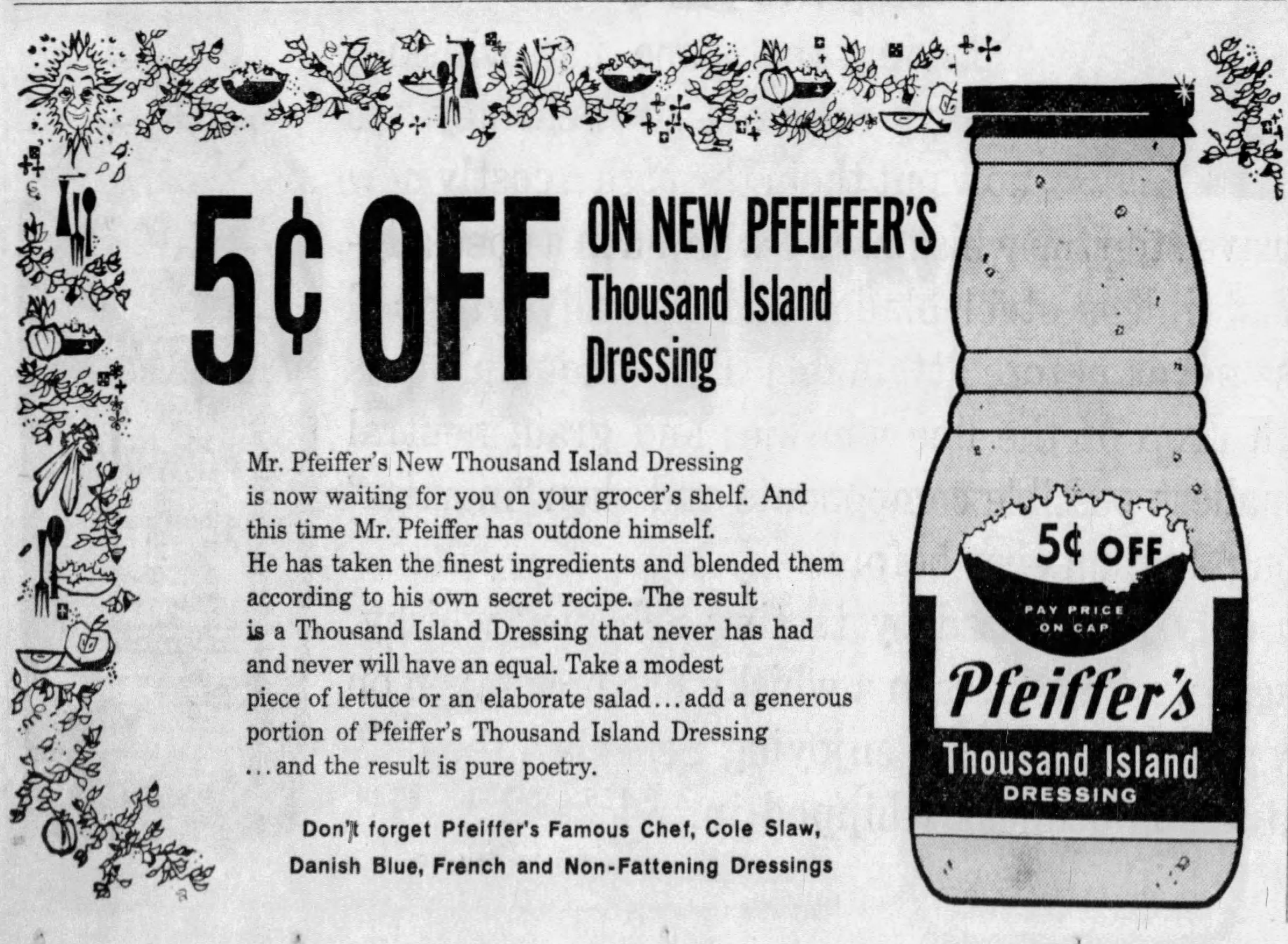 Though by the 1990s and into the present the dressing became less of a dressing and more of a sauce or spread for burgers and sandwiches. Many now think of Thousand Island as an accompaniment to a Reuben sandwich or the sauce on a Big Mac (though there are disagreements if the Big Mac sauce is Thousand Island or not). Even a 2009 article jokes that no one in America uses Thousand Island as an actual dressing anymore. It is not even offered at many restaurants as a dressing choice. It is not even close to being America’s favorite salad dressing either. When Food Network did a poll on dressings, Thousand Island was not even in the top three. It fell behind ranch, Caesar, Italian vinaigrette, and blue cheese. Though it does supposedly have a strong and loyal following in Upstate New York.

Why should I make Thousand Island dressing?
I wasn’t sure I would like the homemade version with the chopped egg and the other mix-ins but I was pleasantly surprised. I agree with the above 1967 article that the homemade version is really good. It is a little sweet with a bit of tang and works well with iceberg lettuce. I know that iceberg lettuce has gotten a bad rap in the last decade but trust me. Also if you don’t like the idea of any of the ingredients that get stirred in the base then just omit it. That is what the home cooks of the past would do so be like them and make it your own. 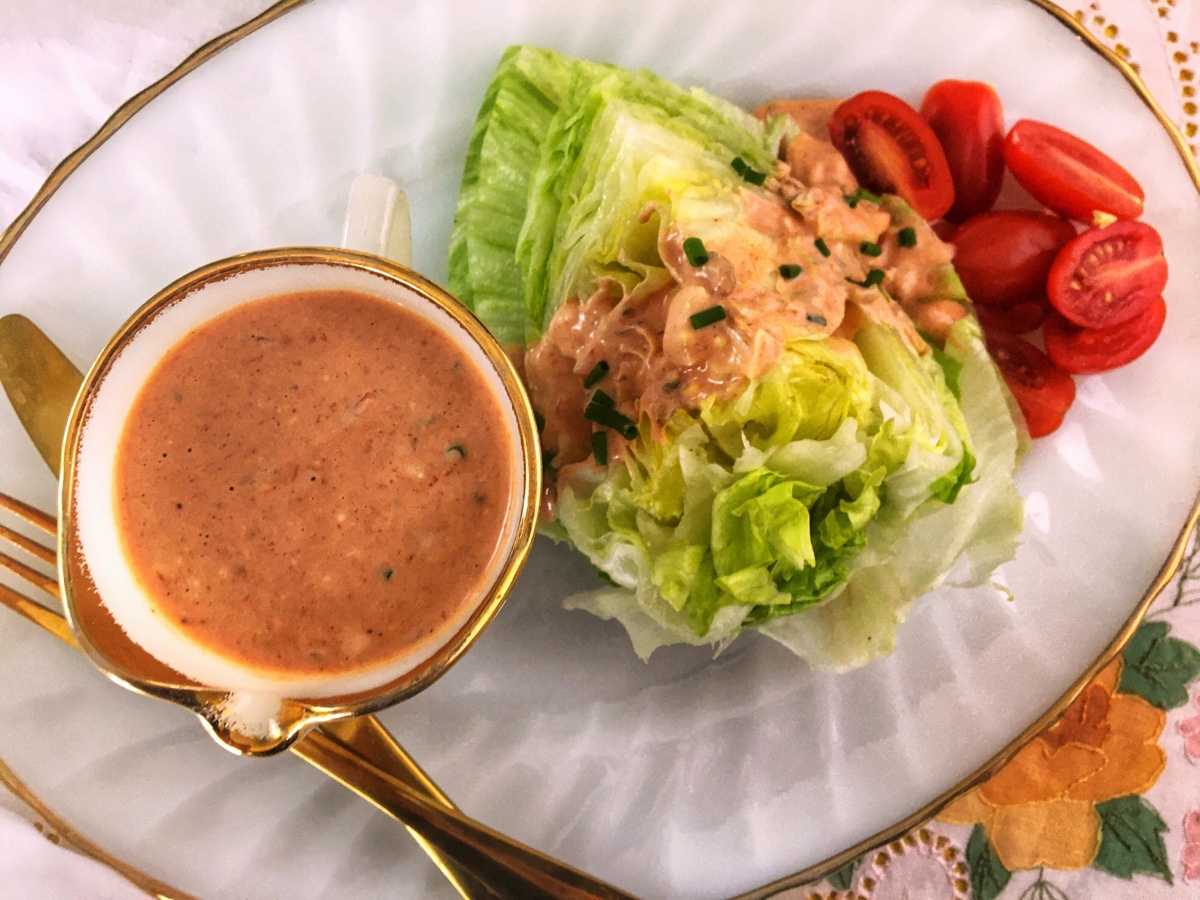 How do you make Thousand Island dressing?
I tried it both with the chili sauce and the French dressing and I did prefer the chili sauce. If you want it more like the bottled version then just use a blender to get a smoother texture. The salad in the pictures was achieved by quartering a small head of iceberg lettuce, ladling on some Thousand Island dressing and topping it with a few chives. I also halved some grape tomatoes to put on the side for some color.

One of the many ways one can make Thousand Island Dressing.

Gilbar, Steven. Chicken a la King and The Buffalo Wing: Food Names and the People that Inspired Them. Ohio: Writer’s Digest Books, 2008.

Gilbert, Janet. “Minding the Dressing and other Tips on Sellbydatus”. The Baltimore. March 29, 2009.