I will admit this particular post gave me some trouble. I have had the research, recipe tested and photos were taken for about two months now but every time I have tried to write the post I go blank. I am finally glad to have this done and posted!

Tomato soup cake is not a cake I grew up with. I actually never heard of it until I was already an adult and to be quite honest my first taste of this cake was while testing recipes for this post. Though when complying with a list of old recipes I wanted to research for this blog I knew this interesting cake had to make the list. 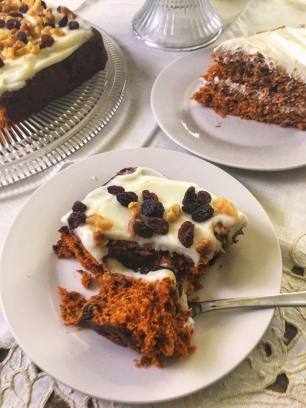 Who and where was Tomato Soup Cake created?
We have the 1920s to thank for the recipe that we know as Tomato Soup Cake. The recipe was created by Campbell’s Soup Company to use with their condensed tomato soup. According to the Campbell’s Soup website, the first recipe appeared in an undated cookbook probably from the 1920s or possibly the 1930s. Later in the 1950s/1960s when boxed cake mixes came to be popular, we finally have the recipe that many now know.

The recipe also appeared in this undated booklet from the 1950s.

What ingredients are in Tomato Soup Cake?
It really depends on the time period but most are a spice cake, whether homemade or boxed, with tomato soup and usually frosted with a cream cheese frosting. If you want to create a recipe before World War II, that was of course a homemade spice cake that was probably a little more densely filled with raisins or chopped dates and nuts. Most likely it was baked in a loaf pan or at least a single-layered though there were a few that was a two-layer cake. Some recipes I found were frosted with cream cheese frosting while others were left plain.

A postwar recipe was most decidedly made with a boxed spice cake mix and baked in two layers and frosted with either homemade or store-bought frosting. Some recipes did experiment with other flavors of boxed cake mix (chocolate was a little popular) but most liked the spice cake combination.

When was Tomato Soup Cake popular?
This is a cake that has piqued the interest of adventurous folks since its creation as Jean Anderson in her book The American Century Cook joked that “America has always been fascinated by cakes made with strange ingredients”. Ceil Dyer in a 1982 printing of her book Best Recipes from the Backs of Boxes, Bottles, and Jars said that “a half-century of good cooks have baked this Campbell’s Tomato Soup cake”. She goes on to call it “as moist, delicate, and delicious as it was fifty years ago.”

A blurb in a 1939 newspaper encouraging readers to send in for a tomato soup cake recipe.

It does seem that the 1960s and 1970s were the decades that grabbed onto this cake. This is probably due in large part to the cake being the first recipe to appear on a Campbell’s Soup label. An article from the sixties urges you to make this recipe to “surprise your family and guests; with a tempting tomato soup cake made so lusciously filled and topped with a fluffy white frosting”. In the 1970s, Campbell’s printed the recipe in their cookbook called 100 Best Recipes. The newspaper article about this recipe and the cookbook called the cake “a winner for more than forty years and its popularity never waned”. They also called the cake special because it is always moist. Just some random fact is that the cookbook only cost $2.95 at the local book store or one could send in $1.95 and two Campbell’s Soup labels to the company and they would send you a copy. 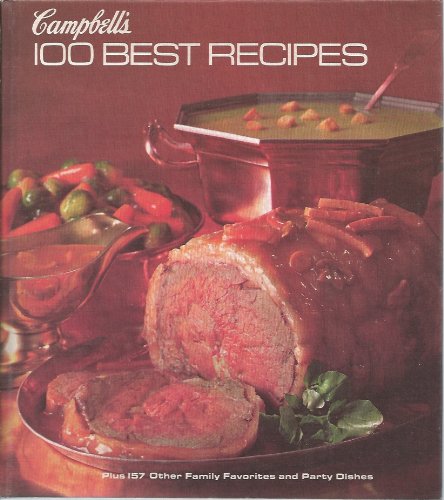 1970’s cookbook from Campbell’s which included the recipe

Why should I make Tomato Soup Cake?

So let’s be real right off the bat. I am not going to convince all of you to try this cake. Some have already decided that the idea of tomato soup in a cake is just not right. That is alright. I completely understand. If you have not made up your mind yet, here are some reasons why you should give this cake a try. First, you do not really taste the tomato paired with the spice cake. Second, the soup compliments the flavors and really does keep the cake quite moist. One article had a reader who agrees by saying “I know it sounds yucky but the cake is really moist and surprisingly delicious”. Another reader wrote to Heloise, a popular newspaper columnist who offered household tips and recipes, asking for a recipe. She had tasted the cake and was surprised at how much they enjoyed the cake calling it “mouth-watering goodness”. It is a recipe that still has its followers as one in five recipe requests from Campbell’s Soup is for tomato soup cake!

How do you make Tomato Soup Cake?

I tried many recipes therefore I had a hard time deciding between one from the 1930s and the classic cake mix one from the 1960s. Because this is me, I decided to include both. The 1930s recipe will be the main recipe as it is longer and I will include the cake mix version in the notes.

The classic and unique cake made with a can of condensed tomato soup. The main recipe makes a dense 1930s single layer version full of raisins and nuts. See notes for the two layer box cake mix version.

To make the cake:

12 thoughts on “The History of Tomato Soup Cake”