When I was younger Peach Melba was a dish that held such mystery to me.  What was a melba and how did it connect to the peach?  I was quite surprised when I found out as I got older that it was a pretty simple dessert!

Who and where was the Peach Melba created? 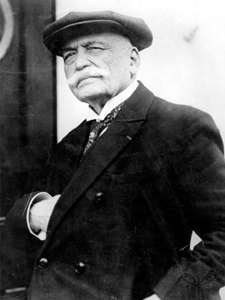 So it is agreed upon the famous French chef George Auguste Escoffier made the dessert for the Australian opera singer Nellie Melba. What is a little more murky is the reason why as there a few different stories of Peach Melba’s origins. So here are the contenders:

1. The most popular tale is that Escoffier created the dish to serve at a Savoy Hotel party to honor Nellie Melba and the opening of the romantic opera Lohengrin in London. This was in 1892 when Escoffier was the chef at the hotel. An addition to this story sometimes is that after hearing her sing, he was so inspired that he created Peach Melba.

2. In a 1909 biography written about Nellie Melba, the dish was created not at the Savoy Hotel but instead later at the Ritz-Carlton in London where the opera singer was staying during her 1898-1899 tour. The story goes that the singer asked for peaches and ice cream so much that Escoffier, who was now working at the Ritz-Carlton, then created the dessert.

3. The third story comes from Nellie Melba’s 1925 autobiography Melodies and Memories. In it she says that it indeed was the Savoy Hotel but instead during the years 1904-1905 when Escoffier created the dish for her. It has been noted that there is a small conflict to this because Escoffier left the hotel in 1898. In her autobiography, she remembers the day she received Peach Melba for the first time. “There arrived a little silver dish which was uncovered before me with a message that Mr. Escoffier had prepared it especially for me. Much as Eve tasted the first apple, I tasted the first Peach Melba.”

What ingredients are in Peach Melba?
Escoffier stated that “Peach Melba is a simple dish made up of tender and very ripe peaches, vanilla ice cream and a puree of sugared raspberry. Any variation on this recipe ruins the delicate balance of its tastes.” Today and as in the mid century that dish is simply peaches over vanilla ice cream topped with a raspberry sauce.

When was Peach Melba popular?
It became quite popular around the time it was created. Which is no surprise as Nellie Melba was very famous in her day with many products using her face and name to increase sales. The dessert was mentioned in Edith Warton’s 1905 novel The House of Mirth. Supposedly in 1906 was the first time the recipe appeared on an American menu.

The mid century also showed great interest in Peach Melba which was considered a quite elegant dessert. The dish appeared on hotel menus and in dining room dinner parties alike. In the 1950s, a bottled Melba sauce was on the markets as well as peach Melba flavored ice cream. In cookbooks, you can find recipes for peach Melba pies and cakes as well as other dishes based on the peach raspberry flavoring.

Why should I try this dish?
Well lets be honest if you don’t like peaches, vanilla ice cream nor raspberries there is little I can do to convince you to try it. If you like all three then this is the dessert for you. The dish is easy to put together and makes quite a pretty presentation.

How do I make Peach Melba?

A easy mid century dessert of peaches and ice cream topped with raspberry sauce that hails from the late 1800s.

4 thoughts on “History of Peach Melba”

I posted some old 1950s newspapers ads for Valentine’s Day that I found throughout the year while researching other topics. Check them out on Quaint Cooking. I also linked to the ones I posted for Halloween if you are interested. #valentines #valentinesday2020 #vintage #1950s #fifties #midcentury #vintageads #vintagevalentine #retro #quaintcooking
Today on Quaint Cooking, I continue down my journey into fondue with a stop at chocolate fondue. There is nothing wrong in my book with dipping delicious sweet tidbits into a silky chocolate sauce. Well....unless you hate chocolate. Check out my blog for the recipe and a little bit of history on this classic fondue dessert just in time for Valentine’s Day. #fondue #hearts #fonduepot #valentinesday #chocolatefondue #chocolatesauce #chocolate #retrodesserts #retro #kitchy #1960s #sixties #vintagefoods #midcenturyfoods #vintage #delicious #iwanttoswiminthis #quaintcooking
Fondue!!! I talk about the classic cheese fondue on Quaint Cooking today. Also totally love this green fondue pot which was also pictured in the 1976 Southern Living The Fondue and Buffet Cookbook! Check it out with the link in the bio. #fondue #cheesefondue #cheese #retrofood #retro #kitschy #kitschyfood #vintage #vintagefood #1960s #1970s #ooeygoeycheese #avocadogreen #fonduepots #fondueparty #quaintcooking
Today I posted a cheese fondue recipe that you would find in many cookbooks before 1950s (though I have come across this recipe in later cookbooks). It is called cheese fondue and it is a dish that is a cross between a soufflé and scrambled eggs. Super easy to put together! This one I got out of the Betty Furness Westinghouse Cookbook that I wrote about last week! Tomorrow will be the cheese fondue most people think of when fondues mentioned. #old recipes #cheesefondue #eggs #cheddarcheese #vintage #recipes #eggrecipes #cheeserecipes #easyrecipes #quaintcooking
This month on Quaint Cooking is Fondue February! I have been collecting and preparing for this for what feels like forever. This week I will be talking about two entirely different cheese fondue recipes. Next week will be all about chocolate fondue (and a Jell-O recipe will make an appearance). Third week will be fondue bourguignonne otherwise known as beef fondue. The last week will be a few of the recipes that this craze brought forth in the 1960s and 1970s. #fondue #1960s #1970s #sixties #seventies #cookbooks #vintagecookbooks #fonduefebruary #bookstagram #vintage #fonduepots #foodtrends #quaintcooking
Today on the blog I talk about the Betty Furness Westinghouse Cookbook. Betty Furness had a long and amazing career. First in the 1930s and 1940s as an actress in RKO films. She was in Swing Time with Ginger Rogers and Fred Astaire! (One of my absolute favorite movies). Then as the regular spokesperson for Westinghouse for the 1950s. Lastly, she worked as a consumer advocate first for President Lyndon Johnson and then for TV news. On the blog I talk about her time at Westinghouse and then about this amazing yet completely underrated cookbook. Plus as always there are old advertisements featured. Check it out on my blog Quaint Cooking. Link is in the bio. Also if anyone could tell me if there is or isn’t any difference between the yellow cover and teal cover. I could not find anything in my research and I have the yellow copy. #vintagecookbooks #oldcookbooks #bettyfurness #westinghouse #westinghousecookbook #midcentury #vintage #1950s #fifties #midcenturycookbooks #1950scookbooks #oldads #vintageads #quaintcooking